So you're interested in LEDs and building a custom system for your reef aquarium or horticultural setup? You've come to the right place. This article will cover the major components of an LED build and what role they cover, and make several recommendations along the way.

There are three main categories of components which make up every LED system - without all three all you have is a pile of parts. The fourth category, namely dimming controllers, are strictly optional, however controllability is one of the key advantages of LEDs, so adding controlability is often sought out.

LEDs are the heart of your system, as the name implies. The actual LED chips are a semiconductor device which emits light when a low DC voltage is passed through them. The chips also emit nearly a single wavelength of light, measured in nanometers. The human eye and brain maps these wavelengths into colors - visible light, for the human eye, is in the range of 400-700nm. Various biological organisms use light in this range for energy and coloration - for example photosynthesis.

Since LEDs emit a very narrow range of wavelengths (for example, 445-455nm), some LEDs, such as the white, lime, pc amber, and mint colors, have a phosphor on top of the LED chip. Like in fluourescent lighting, this phosphor takes a high energy Royal Blue (450nm) LED and converts it into a broad range of other frequencies (such as colors between green and red, to simulate "white").

The actual LED chips are encapsulated into a variety of packages, available in various sizes and properties (domed, flat, large, small, etc). These packages require surface mount soldering to attach them to a thermal substrate and electrical carrier board, commonly called a Printed Circuit Board (PCB), or otherwise known as a "star board" or "LED puck" (especially if more than one LED package is on the board). The PCB material is a special aluminum base - LEDs can only convert up to 45% of the energy to usable visible light (this is more than most other light sources) - the rest is lost as heat which must be "wicked away" from the LED its self through thermally conductive materials such as aluminum. 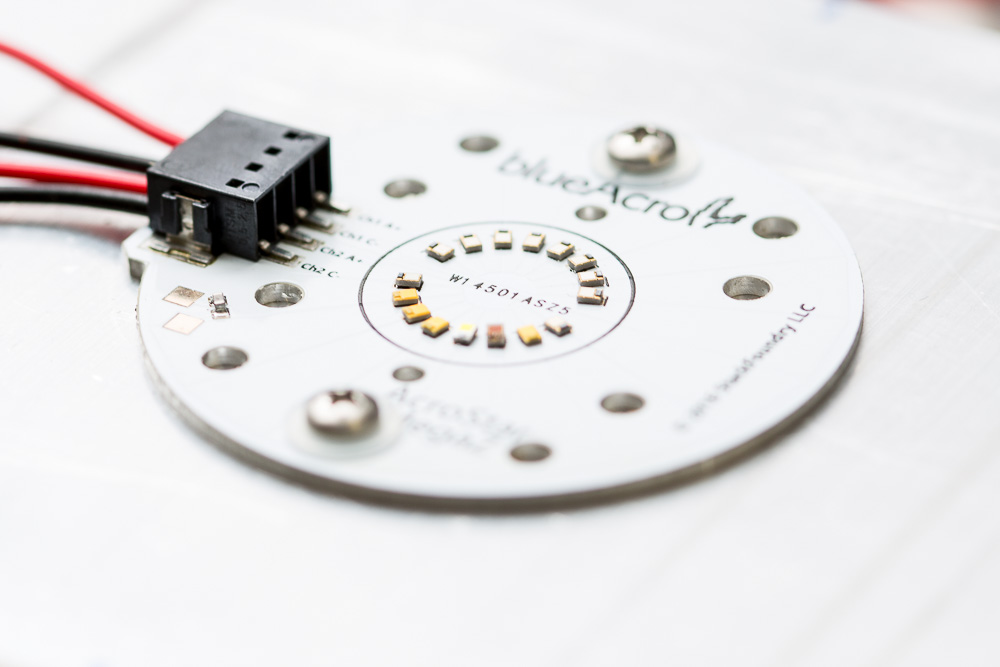 Traditionally DIY LED builds required mounting and soldering somewhere between 10-100 LED stars on a heatsink. The blueAcro solder-free AcroStar and AcroStrip products reduce the headache and complexity to only a handful of components.
blueAcro uses high quality LEDs from Lumileds (formerly Phillips). Lumileds is the leading innovator in LEDs, surpassing even the mainstay Cree in product lineups tailored to the reef and horticultural lighting market. LEDs from Cree, Lumileds, and OSRAM lead the market in longevity, efficiency (light output vs power consumed) and features compared to inexpensive no-brand imported LEDs which often lag one or more generations behind the market leaders.

How many LEDs to use?

LEDs are one of the most efficient lighting sources around, but they still lose over 50% of the energy delivered as heat through their case and body. This heat needs to be "wicked away" to keep the LED at a cool enough temperature to prolong its lifetime and light output.

Heatsinks are a heat-conductive metal (usually aluminum) which the LED stars, such as AcroStars, must be attached to using screws and a small amount of thermal compound.

Heatsinks work by conducting heat, and having a very large surface area to conduct the heat to the surrounding air. The larger the heatsink area, be it in overall size, or in ripples, fins, or other features, the better it will be at expelling the heat produced by the LEDs.

Fans, such as 12V computer fans, can be used to force room air over a heatsink. If the heatsink is smaller than about 12" x 6" per 48W AcroStar, a fan will be required.

Always plan on adding a fan to any LED build - it can save an undersized heatsink easily, while replacing a heatsink with a larger unit can be costly and time consuming. How hot is too hot? If you can't comfortably hold a heatsink while the LEDs are in operation, its likely too hot at the LED its self.

We like Made in the USA Heatsinks from MakersLED and HeatsinkUSA. To avoid drilling and tapping screws into metal, look for a "T-slot" heatsink such as the MakersLED - these allow attachment of AcroStar and AcroStrip LEDs using nothing more than a screwdriver and offer a lot of flexibility in placement.